The real stars of Sorcerer. 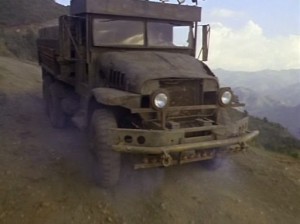 I’ve always wanted to know what the trucks in Sorcerer were. Well, here’s one of them — a two-and-a-half-ton GMC M211 U.S. military cargo truck from the early 50s. They were used in Korea.

This is the truck Roy Scheider and Francisco Rabal drove. Aside from the vents on the side of the hood, the larger mirrors and the extra lights, it appears to be pretty stock.

The second truck, the one labeled “Sorcerer,” seems to be a heavily modified M211 (the grill might be from a Ford). Considering the beatings these vehicles took over the course of the film, including their accidental plunges off the suspension bridge, I wonder how many of each one were built? And where they are now?

In a perfect world, Sorcerer would’ve been a mammoth hit, and we all would’ve built Revell models of each truck — and spent hours playing with the AFX Sorcerer slot car set.

I'm a writer. And a dad. And a husband. And a record collector. And a movie geek (if the movies are old). And I really wish I had a hot rod.
View all posts by Toby →
This entry was posted in Trucks. Bookmark the permalink.

8 Responses to The real stars of Sorcerer.